In this article, you will learn how to get the most out of the Synthetic Variables Engine using special functions or their combination to render more complex expressions. If you are not familiar with Synthetic Variables yet, please refer here to leverage the benefits of this functionality.

Variable Context is one of the best ways to store metadata that isn't necessarily a numerical value. Most common usage of variable context is for the latitude and longitude GPS coordinates. While those values are indeed numerical, it comes quite handy to send them in a single dot instead of 2 separate variables.

Context data can only be used within your synthetic expression if the context is a numerical value. Accessing it from the Synthetic editor is straightforward, you just need to use the dot '.' operator over the variable, call its context and then the context key identifier:

Note: To find more information about context and other features to store values, please refer to Ubidots API documentation.

Suppose that you need to use the Haversine formula to calculate the shortest distance between two locations over the earth's surface based on Latitude and Longitude data. This would be as follows:

where lat is latitude, lng is longitude and R is earth’s radius (mean radius = 6,373km); note that angles need to be in radians in order to pass it to the trigonometric functions.

Keep in mind that latitude and longitude are numerical data stored inside the context of a variable as shown below:

The synthetic expression to calculate the distance will look similar to this one in the synthetic variable editor:

where lat1, lat2, lng1, and lng2 uses the value inside the context to make the proper calculations.

IMPORTANT NOTE: The example above assumes that the variables have the same timestamp. If not, the fill_missing() expression needs to be included.

Similarly to accessing context data it happens with the timestamp. It can be accessed in Synthetic Variables using the dot '.' operator. 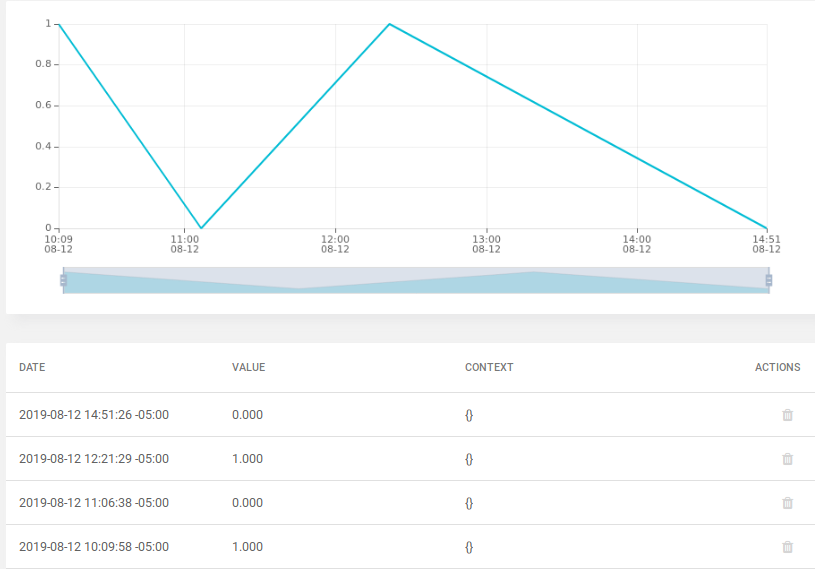 Example:
Imagine you have a variable, like in the image above, storing a value every time a machine TURNS ON (1) or TURNS OFF (0), and you want to calculate how long the machine remains in an ON state (1). This calculation can be done using the variable timestamp as shown below:

At last, one needs to evaluate on dV's sign to check for a negative value, which in turn indicates the machine went from ON to OFF. To do so, there's the function where(), that based on an input condition, takes one of 2 actions for the True  or False condition outcome. For the case herein, it serves well to evaluate the sign and if True, save the time difference between the last 2 states, that is, dT.

Keep in mind this time is in always in milliseconds [ms], if needed, you can convert it to seconds, minutes or hours multiplying by the correct factor.

Data range functions are a perfect fit to make statistical analysis to identify trends in a time period basis. With them, you will not only be able to calculate a value every fixed period of time but also have some flexibility to select the timestamp to which data will be stored, and an initial offset as well, if needed.

where function_name and data_range can be any of the options described here, position (optional) can be either of 2 options, "start" or "end", which indicates whether value is going to be timestamped at the beginning or end of the data_range, and finally, the parameter offset (optional), as it suggest, shifts the starting point from where the function will compute.

The above synthetic expression calculates the mean of variable x every 1 hour ("1H" ), and because non of the optional parameters are defined, the values will be timestamped beginning every hour, that is, all values received from 00:00:00 to 01:00:00 will be mean-aggregated into a single value timestamped at 00:00:00.

Similarly to example 1., synthetic expression 2. will compute variable x mean value every hour but in this case, the engine, because of the position="end" parameter, will timestamp each value at the end of the data range, so for values received from 00:00:00 to 01:00:00, the mean-aggregated value is timestamped at 00:59:59.

There are many instances where a Synthetic Expression involves 2 or more variable time-series, and for those cases, because of the way the Synthetic Variables engine is built, each of the values to be computed must have the same timestamp, otherwise, the engine won't compute or output unexpected results. Nevertheless, not always, if not most of the cases, the variables time-series won't comply to this rule. For such instances, it exists the fill_missing() function, which basically fills the gaps where there's a missing value in either of the variables time-series used within the expression. This function follows the below default syntax:

To better understand this function, let's suppose you have a set of variables that you want to sum up together. As you can see in the below table, the variables A, B, C and D don't have data in all of the timestamps, so fill_missing() function is needed to fill the gaps and ultimately perform the calculation. The examples from 1 to 4 are based on said table:

By default, the fill_missing() expression makes the first_fill  parameter as  ffill, meaning that the function will fill the gaps forward, starting in a point where it has enough data to fill the gaps for all the involved series. The result would be as follows:

On the other hand, the first_fill  can also be set as a bfill. The gaps would be filled as shown below:

Let's suppose you need to fill all the gaps of the variables, in that case you'd need to set both first_fill  and last_fill in the expression, rendering the following:

Additionally, you can fill the gaps with a value. For this case, the function sets a "0" in all the gaps the variables have.