This article explains how and when to use Synthetic Variables in Ubidots' Analytics Engine to compute complex equations.

Ubidots Analytics Engine supports a complex mathematical computation tool called Synthetic Variables. In simple words, a variable is any raw data within a device in Ubidots, and a synthetic variable is a variable that results from the computation of other variables within Ubidots.

This tool allows you to extend your application's functionality. For example, if you develop a temperature logger that reads the variable in °C and you wish to show the data in both °C and °F you would retrieve the sensor change and send two values to Ubidots: one value in °C and another one in °F. This adds (an unnecessary) compute load to your microcontroller, but using the Ubidots' Analytics Engine you need to only send the raw value in °C, and let Ubidots perform the required calculations to convert to ºF, alleviating the excess microcontroller processing requirements.

Here, you will learn the basics about Synthetic Variables and the available mathematical and statistical functions you can implement using this tool.

IMPORTANT NOTE: The synthetic variables engine's computational speed is heavily influenced by the synthetic expression complexity, which results in calculation times ranging from a few seconds to a few minutes.

Ubidots stores dots that come from your devices as default variables, and these data have corresponding timestamps that organize each one of them into a time-series list, using the following sequence:

With Ubidots Analytics Engine, you can apply different operations to the time-series data-set to create an adjacent data-set containing computed variables; these new variables are called Synthetic Variables. To create one, click on the "Add new variable" option within your device, then select Synthetic. 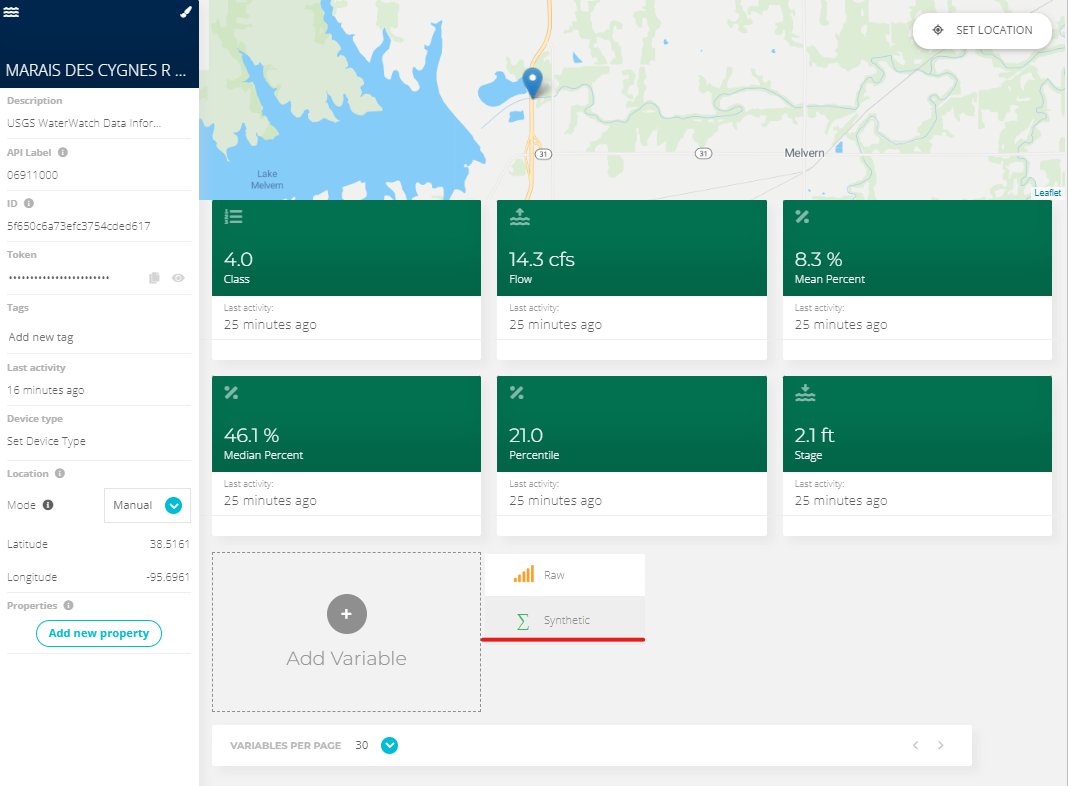 A synthetic variable consists of a math operation applied to the whole time series:

In the above figure, a square root expression is applied to the time series data.

Convert a temperature value from °C to °F :

The synthetic editor will look as follows: 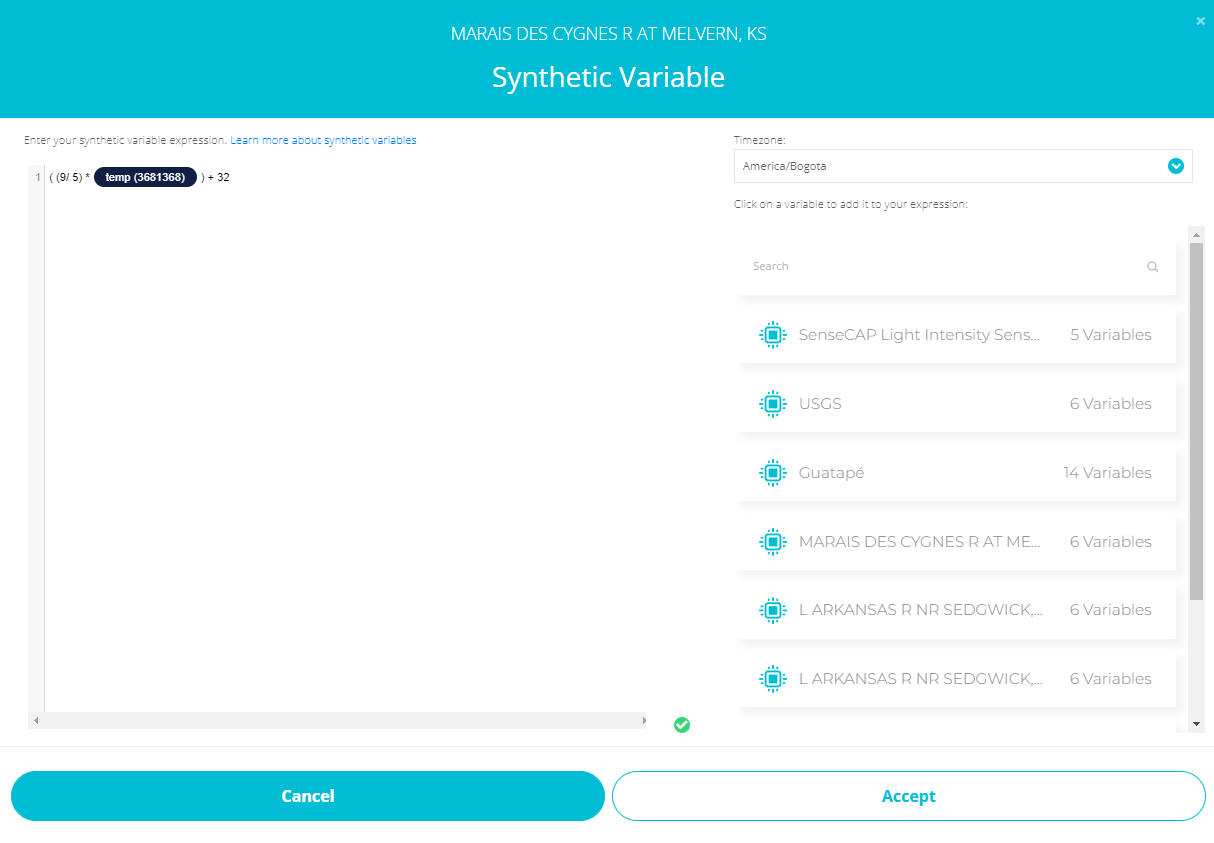 Ubidots allows you to create new variables from your time series based on date range data, i.e calculate average temperature per hour or day based on your sensor's readings using a synthetic variable.

Below you can find the commonly used data range functions and formula structure:

Example:
The average temperature every 10 minutes in °F

The expression should looks as follows: 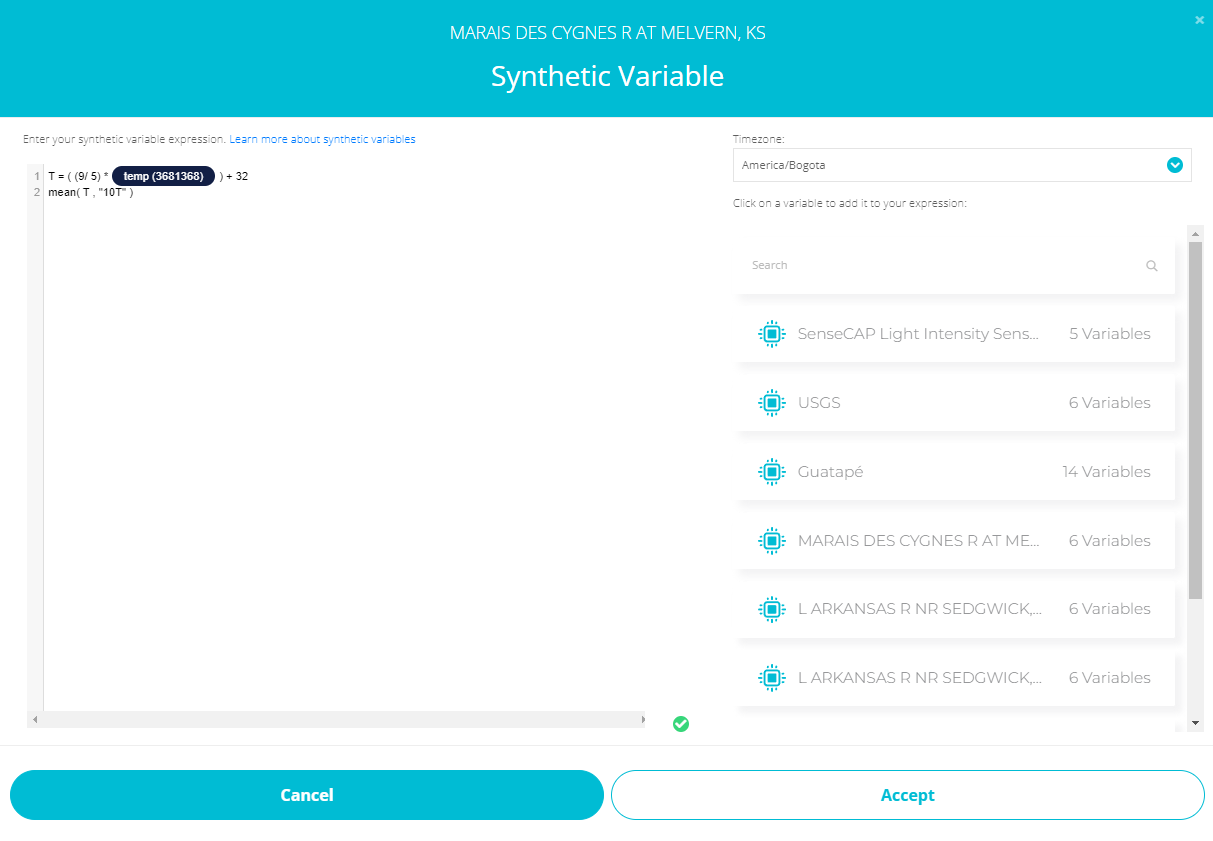 Every n data range starts its period at 00:00:00, however, there are particular applications where the desired starting point is not 00:00:00 but rather 02:00:00 or 00:40:00, depending on the input data range. To apply an offset, the above functions can receive a third parameter called offset, as follows:

This function returns the computed value of a data series within a time window or a given number of values, using one of the following aggregation methods: "mean", "sum", "min", "max", or "count". 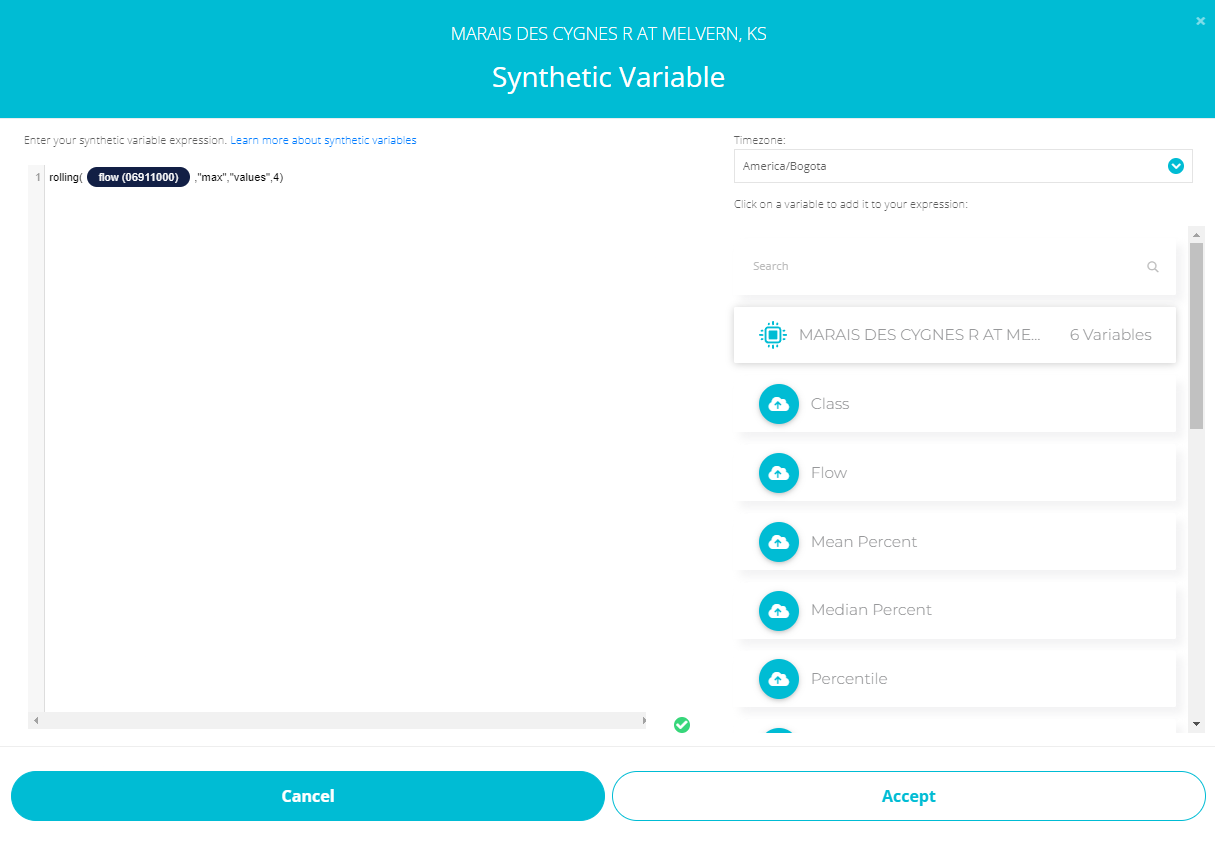 Calculate the maximum value of a sample of four data points.

There are additional functions for more complex operations:

Populates the new synthetic variable with a '1 (true)' if the temperature value is greater than 20:

Populates the synthetic variable with a '1' if the temperature value is greater than 20, if not, fills with a '0' value.

Stores the variables' timestamp if it is lower than 20 OR greater than 50:

As you can see, the dot, '.' operator lets you access and represents the variable's timestamp.

This function calculates the difference staring at the last element in a time series and the next separated by a specified number of steps.

The function returns the variable's values in the time series shifted by the given number of steps.

This function returns the cumulative sum of a time series.

Context data can only be used within your synthetic expression if the context is a number.

Similar to retrieving context data, you can retrieve the timestamp of a variable using the dot '.' operator. For more information about advanced functions, check out this article: Analytics: Advanced Synthetic Variables

The synthetic variables editor allows you to select the timezone to reference the exact variable's timestamps based on a particular timezone. This comes in handy when your clients are located in a different country and need to see the data in their timezone. 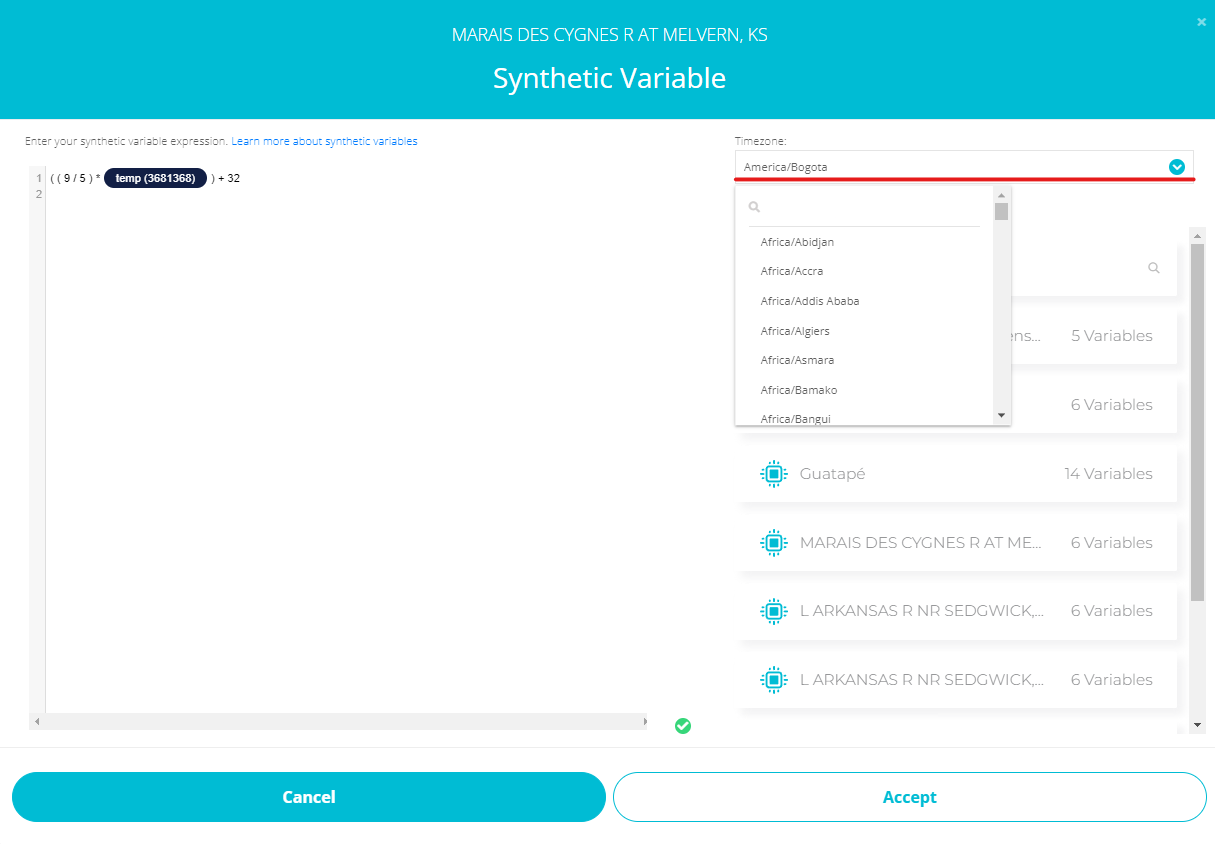 After clicking the Accept button, the synthetic variable will calculate data based on the selected timezone and the results will be automatically saved as a time series variable.

Now you're ready to start creating analytics and insights from your data using Ubidots' Analytics Engine and the Synthetic Variables. For additional troubleshooting and inquiries, check out the Ubidots Community not only Ubidots will help, but also your fellow users who may experience the same errors.