Upgrading the firmware of your CC3000 Wi-Fi module 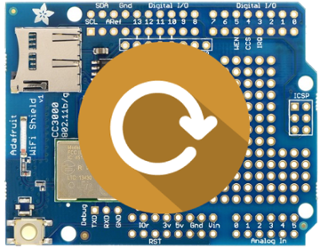 The CC3000 WiFi module from Texas Instruments is one of the most popular Wi-Fi modules in the market. It is widely used in Arduino projects but it can also be used in any microcontroller project, through its SPI communication interface.

As one of the first modules to become popular in the maker world, it quickly caused the hardware community to suggest bug fixes and improvements, helping the manufacturers come up with new and more stable firmware versions. So, in order to get the most out of your CC3000, we really suggest performing a firmware upgrade!

In this post we'll explain how to upgrade the firmware of the CC3000 Wi-Fi module. Before this, keep in mind the following:

Hit any key & return to start

Enter some text and press any key to start the firmware upgrade process. The upgrade will happen fairly quickly and should be done in a minute or two.

After the CC3000 upgrade finishes, load the buildtest example contained in the Adafruit library and run it. If the test runs well, then you have successfully upgraded the firmware of your CC3000 shield!

Want to build awesome IoT projects using this and other modules? Sign up for a Ubidots account to get started.

This article originally appeared in Ubidots' Blog on January 20, 2016.