Send data from a Raspberry Pi to Ubidots using balena

Learn how to set up a Raspberry Pi and send data to the Ubidots cloud over balena.
A
Written by Adriano Toro
Updated over a week ago

In past tutorials, we have seen how to install Node-RED in Raspberry Pi, and People Counting Systems with OpenCV, Python, and Ubidots. This time, we'll learn how to provision devices and use them through balena to send data to Ubidots.

Balena is a powerful set of tools for building, deploying, and managing fleets of IoT devices. balena makes it easy to manage devices and their running services, to do so you can either go through their web dashboard or the API via the CLI and SDK. Balena allows you to choose the tools you want to use for your project so the platform adapts to your needs.

In this article, we will install and run a temperature sensor in a Raspberry Pi to send data to Ubidots using balena.

Once you have created your balena account, your first step will be to create a fleet which are the settings that will go through a group of devices. In this case, we will create a fleet that will hold Raspberry Pi 4s.

Step 1: Click on the create fleet button in the left corner

Step 2: Fill in the requested information

Step 3: After having created the first fleet you can add a device. You'll have to select: 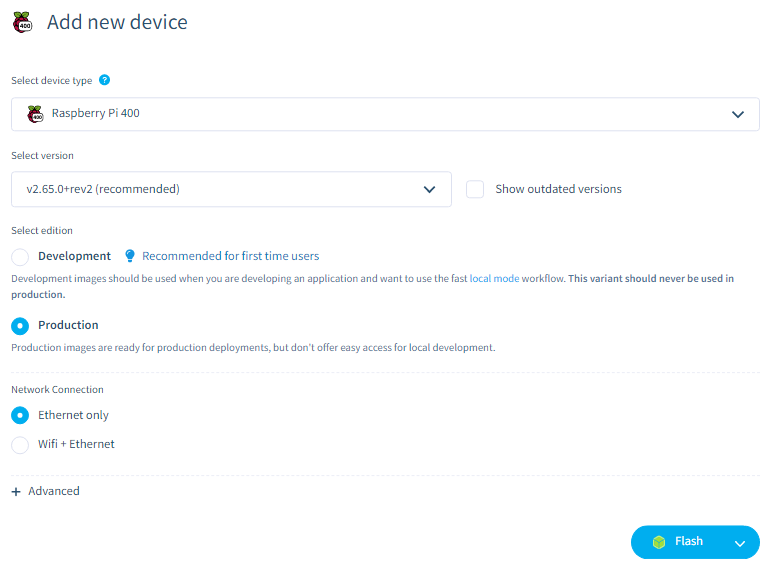 Step 4: To flash the firmware onto an SD card you have two options, either click on flash which will automatically open balena Etcher or you can download the balenaOS to a file. For reference, we used the first option. 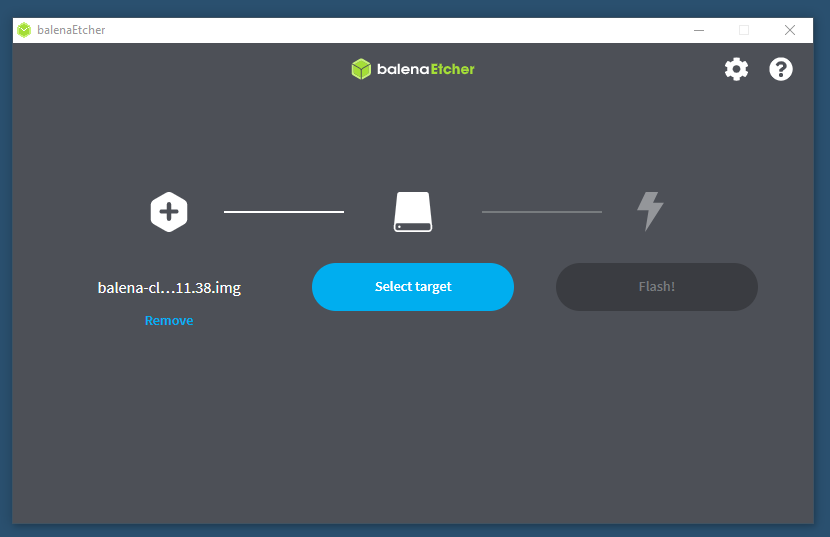 NOTE: Make sure you change any firmware settings before mounting the SD card onto the Raspberry Pi.

The balena CLI is a Command Line Interface for balenaCloud or openBalena. You may follow these instructions to install it in your environment.

Step 1: Install the balena CLI, you can choose from macOS, Windows, and Linux

Step 2: Add the directory in which we downloaded the CLI into your path so that you can run the same commands from any directory.

Step 3: Login into the balena from the terminal. We recommend doing the web authorization as it's a really quick and straightforward process.

Thankfully, there's the DS18B20 digital sensor, which supports the OneWire protocol, making it quite simple to plug into your Raspberry Pi. Here's the wiring diagram for your reference: 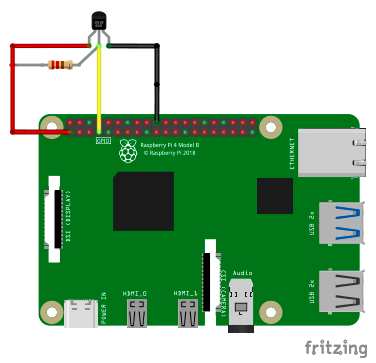 Open your preferred code editor. We'll be using Visual Studio to edit the Docker file and the Python script that reads the temperature values and sends them to Ubidots.

Step 1: Specify which OS you'd like to install into your Raspberry Pi. You can search through balenas website which OS are available.

In this code you have two parts: 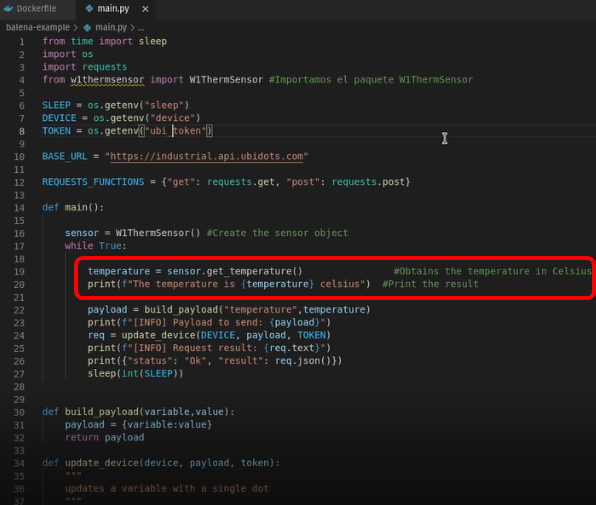 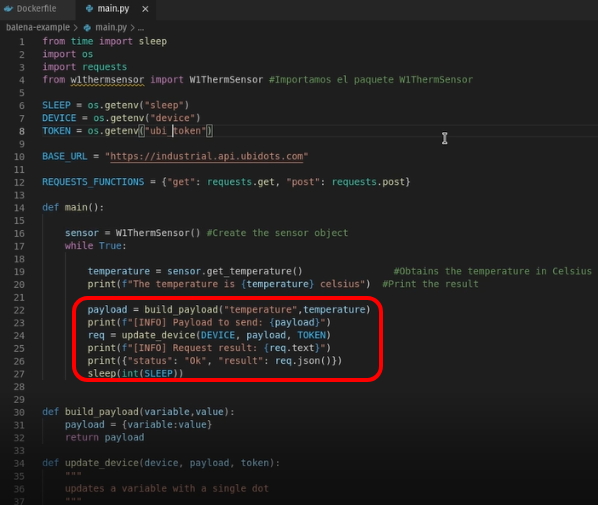 Copy the following code and save it as main.py

In this example, we created the following variables:

Step 4: You need to add one line of code to the settings file to accept the one wired protocol. Go to the balena tutorial and copy the line and add it into the config TXT file of the flash of your SD card.

Step 5: Upload the code into balena: go to the directory where the code is saved and run the command balena push and the name of your fleet. For example, since the name of our fleet was "testingfleet", the command would be:

You know that the code has been uploaded successfully once you see a unicorn. 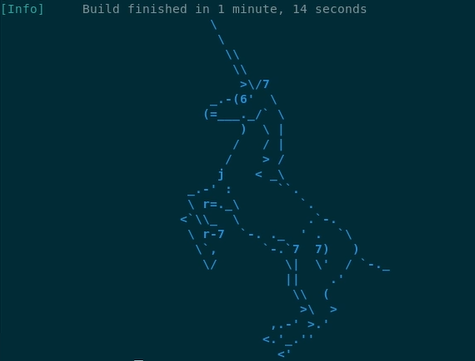 One of the cool things about balena is the ability to set configuration parameters directly in the cloud, which makes it easy to manage a large fleet of devices remotely.

Step 1: Go to balena and click on your device name

Step 4: As mentioned above, we created 3 variables: token, device, and sleep.

To get the Ubidots Token you need to go to your Ubidots account. Click on API credentials, copy the token, and past it in balena. 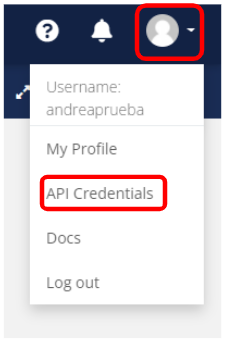 Once these variables have been set, balena will upload the newest version of the container into the Raspberry Pi including the changes of the variables that we just did.

Step 1: Go to the devices menu at Ubidots. There you can find the new device,

now you can see the data that is being sent from balena to Ubidots. 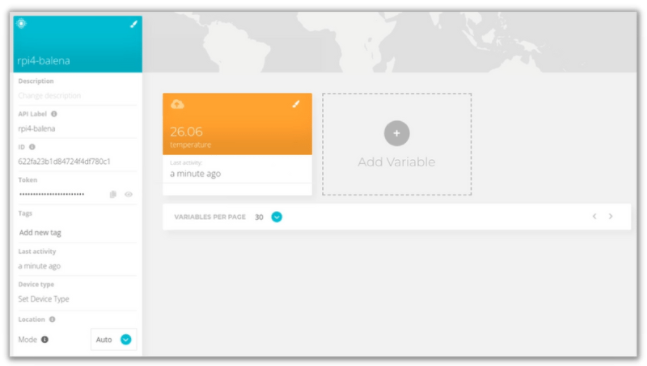 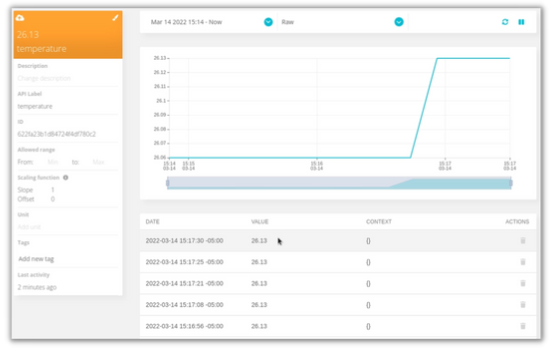