Written by Sebastián Ruiz
Updated over a week ago

NCD’s first IoT edge computer is a Linux-based system that supports LTE, Ethernet, and WiFi connectivity for sending data from the ecosystem of NCD’s Sensors. With the built-in Node-RED this device offers interoperability with a great number of platforms and communication technologies. It also brings a small OLED display and a LED to show the status of the connection among other user-configurable data. 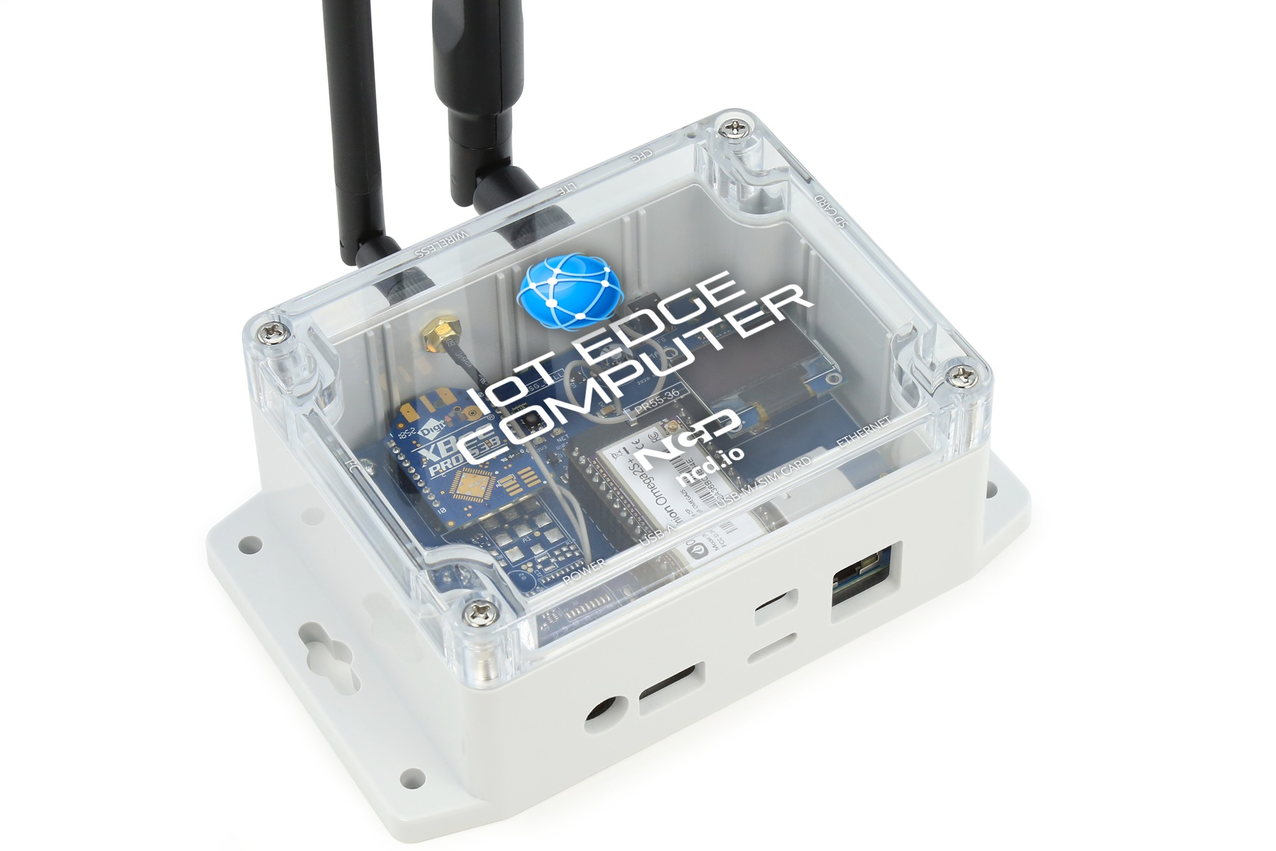 Today you’ll learn how to setup your IoT Edge computer to send sensor data to Ubidots through MQTT in just a few clicks.

The setup for the IoT Edge computer is quite simple, just follow the steps presented in this guide. In this case, we’ve connected the Edge Computer to an Ethernet port, so the steps go as follows.

NOTE: Please be patient with the system, as it will be quite slow the first time that it is running, especially the user interface.

To open Node-RED on your browser, the computer must still be connected to the Soft AP that the gateway created. You can open it by typing 192.168.3.1:1880 into your browser, or by simply clicking the Node-RED tab from NCD’s UI.

In order to make the IoT Edge Computer connect to Ubidots, you must first download Ubidots’ Node-RED library. There are two ways that you can download the library.

Now that the library has been installed, reload the Node-RED tab and you should be able to view two new nodes: ubidots_in and ubidots_out.

First lets try out a simple test just to make sure everything is working correctly by sending a fixed value to Ubidots. Copy this flow into your Node-RED and import it into your flow.

Remember to assign your Ubidots Token in the ubidots_out node and then hit deploy.

A device labelled iot-edge-test containing a variable labelled test-variable should have been created, and it should be receiving 1s roughly every 5 seconds. 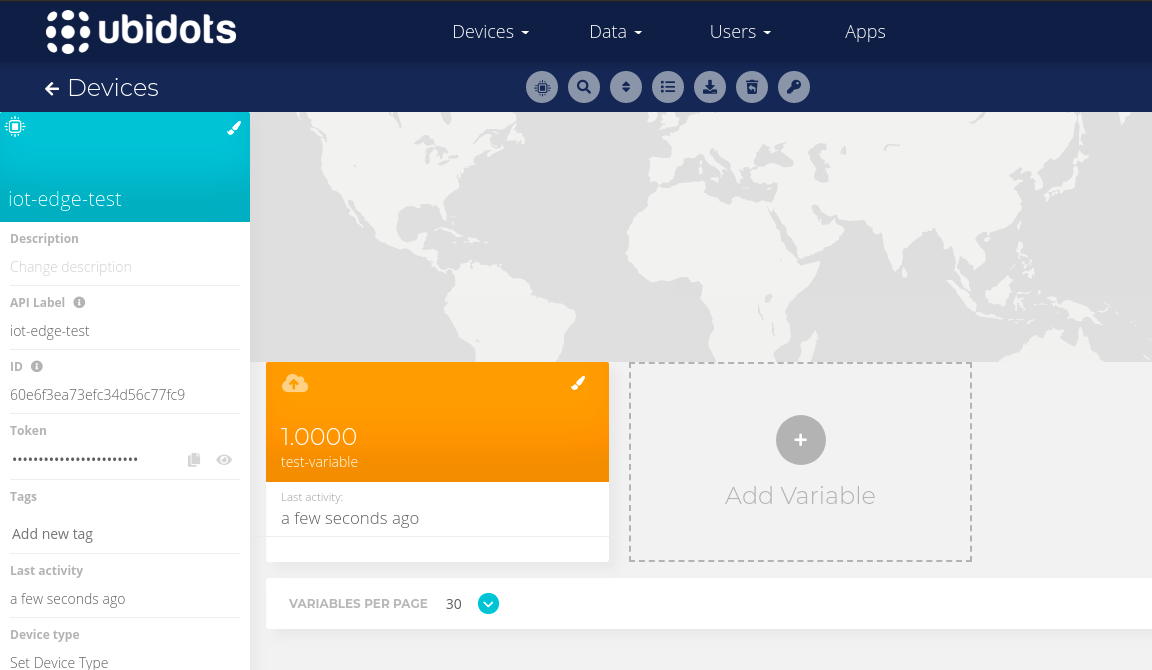 In this example we will use NCD’s Temperature and Vibration Sensor (PR49-24E). 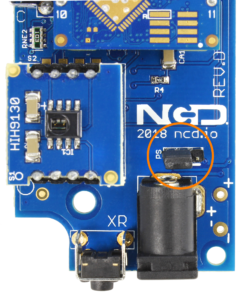 To begin receiving data from the sensor, simply open a Wireless Gateway node from NCD’s preinstalled nodes. Configure it by giving it a name and then have it connected to the Iot Edge Computer via a serial device.

Once that is done you may add a debug message to view the data incoming from the Device. Usually the sensors are configured to send every 10 minutes, but you can force a Data transmission by pressing the RESET button on your sensor.

Once you can see the data coming in, you may add the Function node that extracts the Sensor Data from the whole payload, parses it and builds an Ubidots compatible JSON. 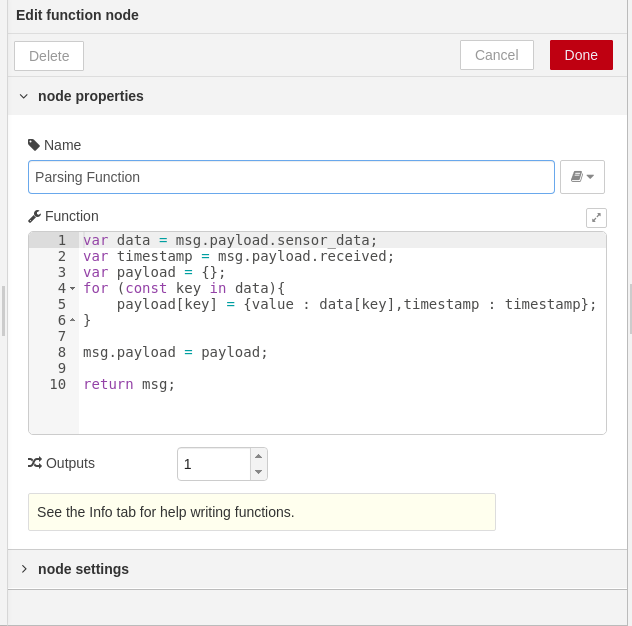 Finally, you add the ubidots_out node to send the sensor data to a device in Ubidots. Remember to assign your Ubidots Token and the Device_label into this node. 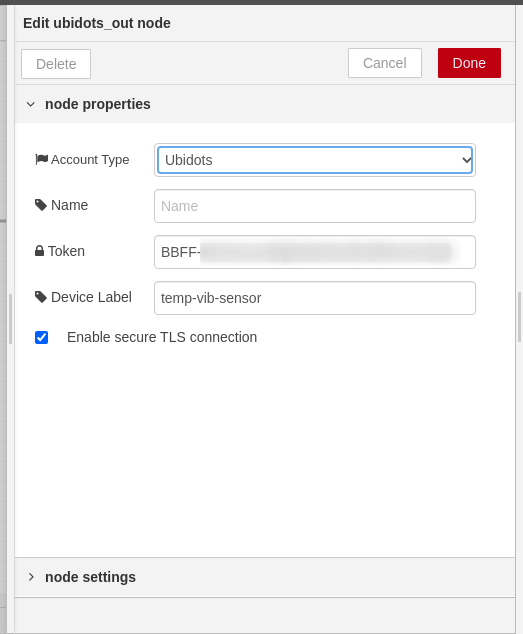 Here’s the clipboard version of the publish example so you can easily import it into your Node-Red flow.

Now the data can be seen in the newly created Device in Ubidots.

The IoT Edge Computer brings many perks that allow you to customize the sensor network and data for you application.
Now that you’ve connected the IoT Edge Computer to Ubidots through Node-RED, you can add a great array of NCD sensors to monitor all of your great IoT applications that require long range connectivity.