This plugin has been deprecated

Take me to the new version

To connect AWS and Ubidots, you can use the AWS Plugin offered by Ubidots which automatically links AWS resources (AWS IoT Core, AWS IoT Rules, and AWS Kinesis Data Streams) for you to stream data directly to your Ubidots powered Apps.

NOTE: For an advanced setup using AWS IAM Role to integrate AWS IoT with Ubidots, please reference to this guide.
NOTE: THIS IS A BETA FEATURE. PLEASE REACH OUT TO YOUR UBIDOTS ACCOUNT REPRESENTATIVE TO ENABLE THIS FEATURE FOR YOU

AWS IoT Core allows you to connect devices to the AWS cloud. You can think of AWS as a managed MQTT broker that accepts any type of message, then routes it to other AWS services and resources.

As an MQTT service, AWS IoT Core is similar to Ubidots MQTT broker, with 3 notable differences:

As a broker, AWS IoT Core needs a way to know where to send the messages received from the devices. For this purpose, AWS IoT Core allows you create rules to filter, transform, and act upon device data on the fly. Here's a sample scenario of data routing using Rules:

The Rule's "Data destinations" can be any AWS service within AWS ecosystem, such as S3 or DynamoDB. When used in conjunction with Ubidots, your AWS IoT Core will use a Rule to route the traffic to an AWS services called AWS Kinesis and then on to Ubidots: 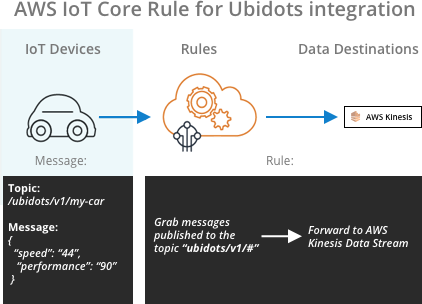 Kinesis is an AWS real-time data streaming service that allows developers to create applications that collect and process large streams of data in real time. To enable the AWS+Ubidots integration, Ubidots choses to ingrate with AWS Kinesis among other AWS services because of these reasons:

With the above understanding, let's get started with the integration!

Ubidots uses AWS Access Keys to securely create the required AWS resources to stream data to Ubidots. Using the Access Key Ubidots will create an AWS IAM Role to automatically execute the integration for you.

To retrieve your AWS Access Keys, go to your AWS IAM Management console, then click on the “Users” option at the left panel, and follow the below steps:

Step 2: Enter a name for the user, Select the option “Programmatic Access” and move to next page.

Step 3: Click on the option "Attach existing policies directly". Look for "IAMFullAccess" and select it. Move to next page

Step 4: Skip the tags page and move to next page.

Step 6: Copy the “Access key ID” and the “Secret access key” which will be used later to complete the AWS Plugin on Ubidots platform. You can also download the keys with the "Download .csv" button.

Now with your Access key ID and Secrete access key, we'll move back to your Ubidots Admin account and execute the below 4 steps to add the AWS Plugin and start streaming data. 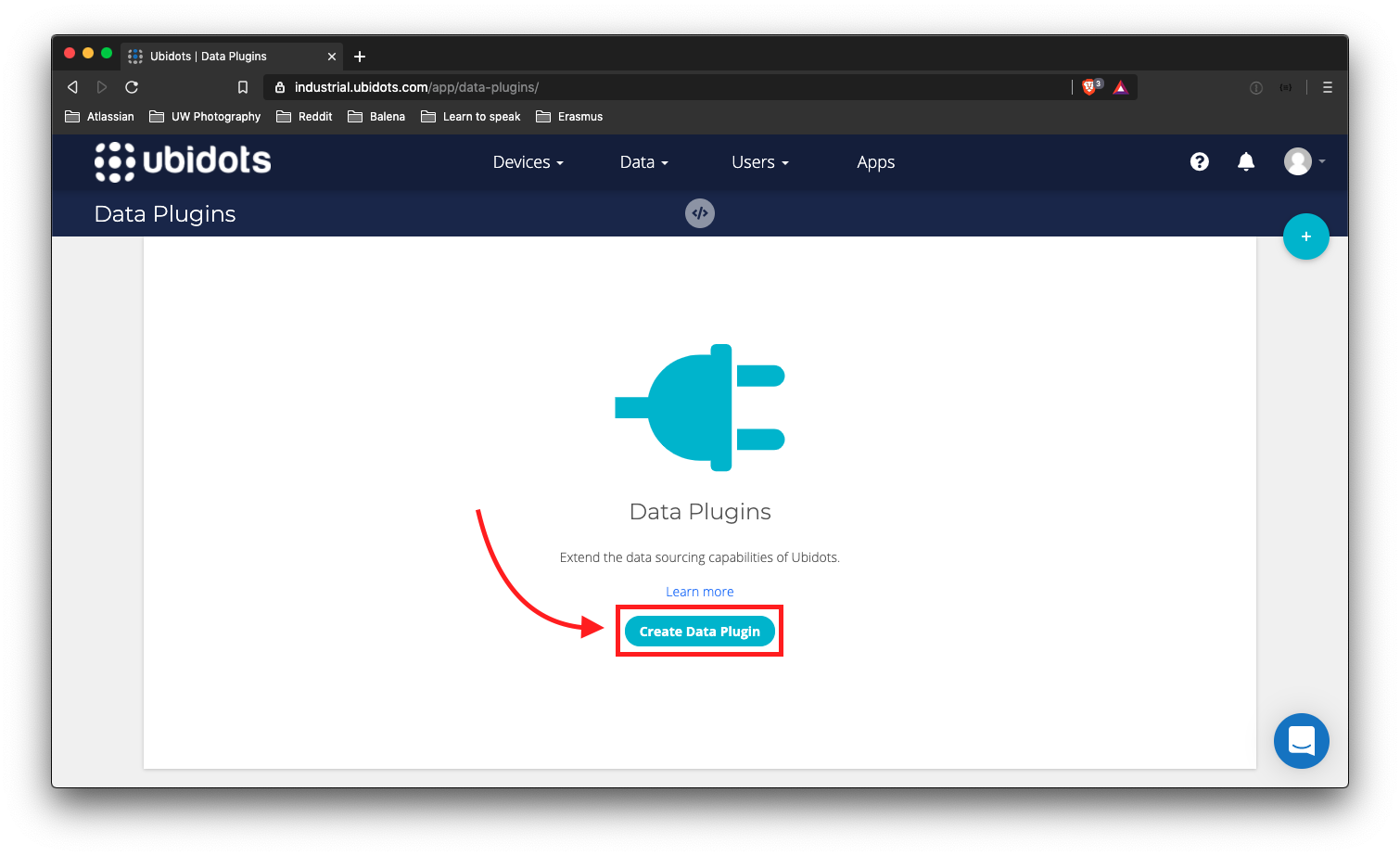 Step 2: Select the "AWS IoT" and then click in the arrow button located at the bottom-right. 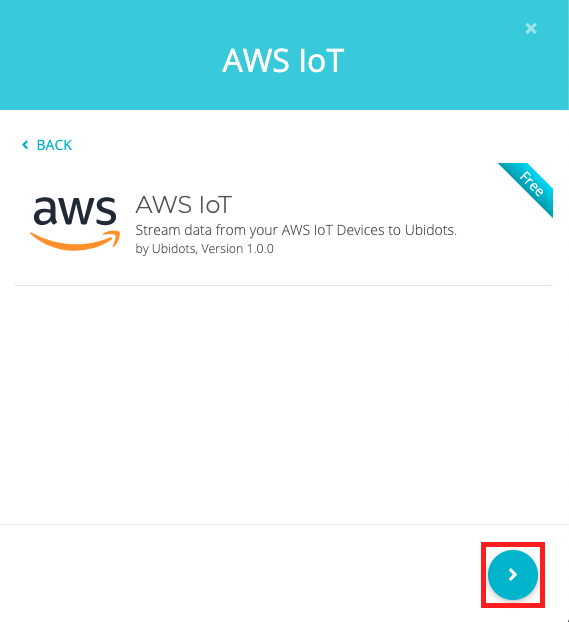 Step 4: Enter your AWS Access Key ID and Secret Access Key created earlier in this guide. By entering your AWS Access Key, Ubidots will automatically setup the required resources in AWS to complete the integration and begin streaming data to Ubidots that is flowing to AWS IoT. 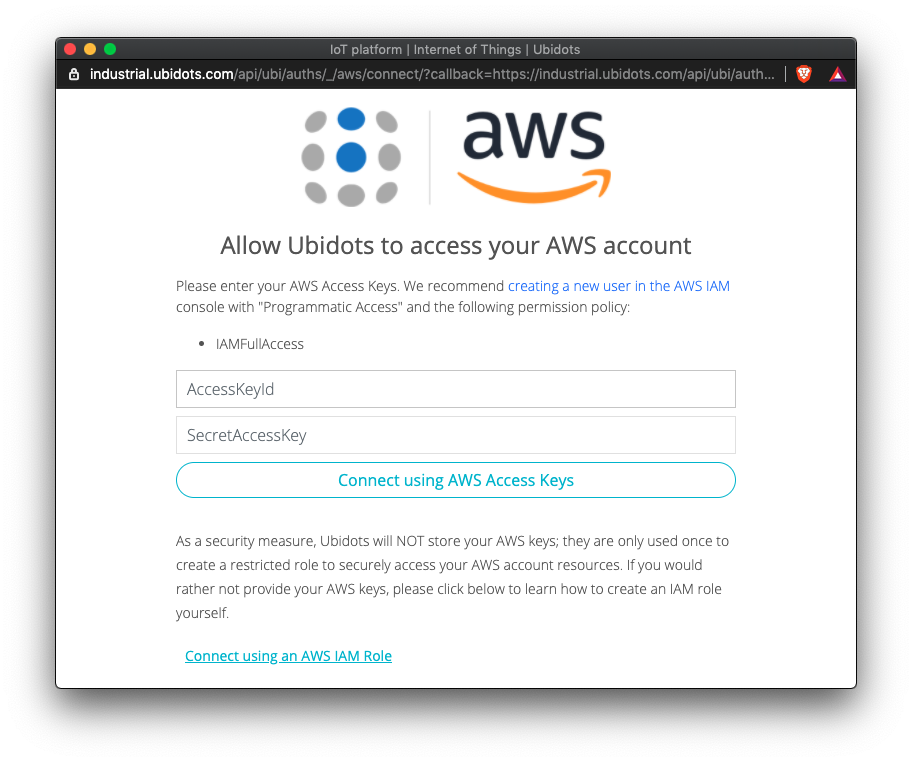 After plugging Ubidots into your AWS account, Ubidots will automatically create the required resources to stream data from an AWS IoT device to Ubidots.

The resources to be created/used to stream data from AWS IoT Devices to Ubidots are:

To create the above resources, simply select the "Deployment region" and click on “Create resources” in the Data Plugin creation process, then wait a few seconds while Ubidots knocks on Amazon’s doors to complete the integration: 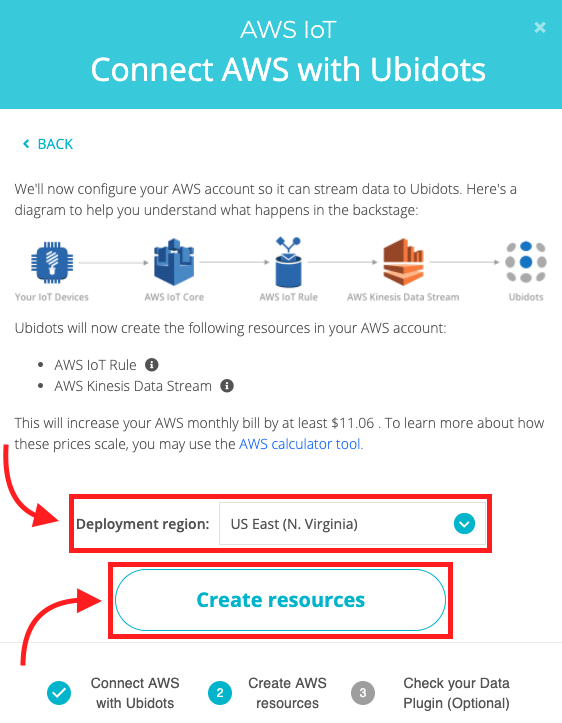 At this point, your Data Plugin is ready to be used. To test it, go to your AWS IoT Core console, then click on “Test”, then “Publish to a topic”: 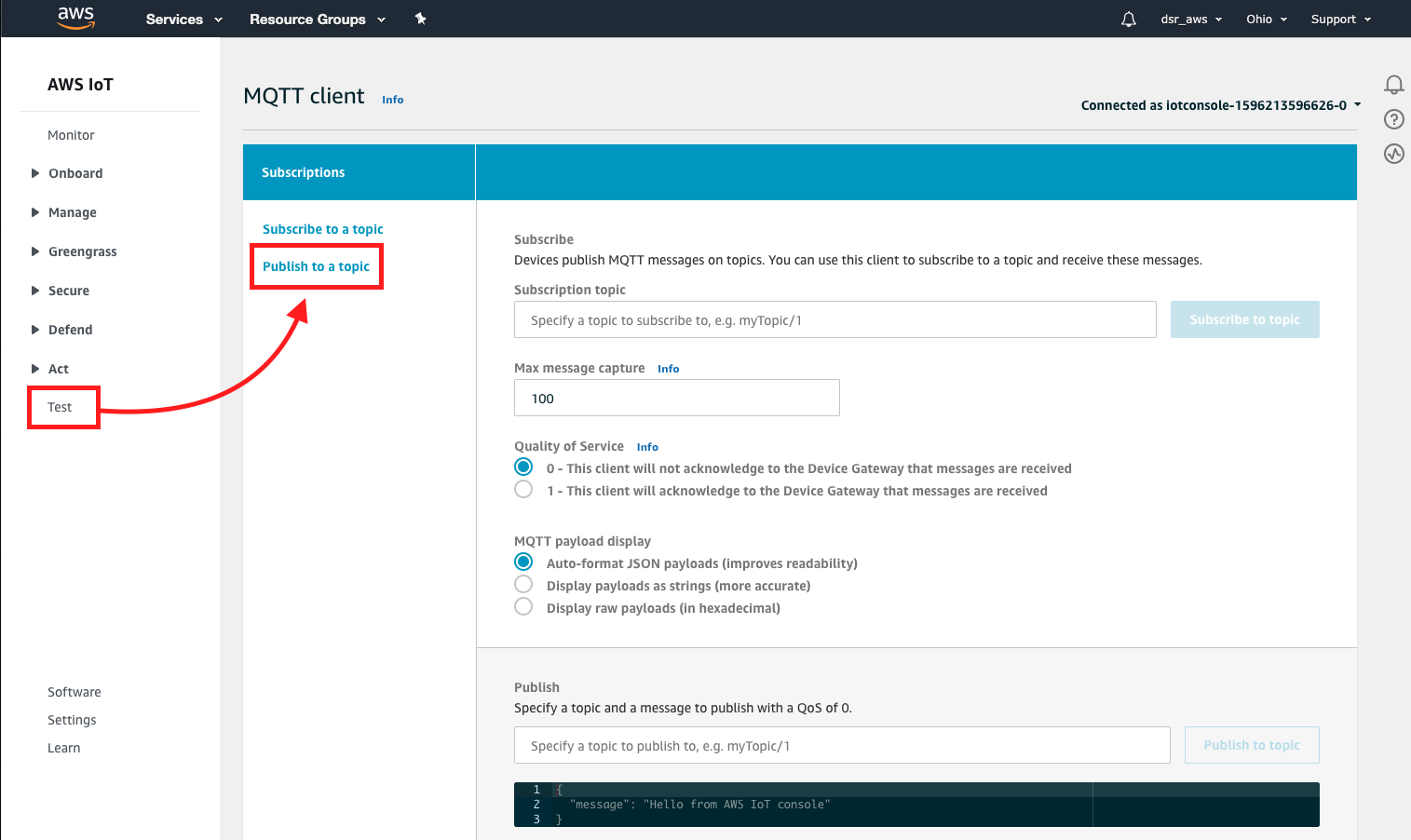 Then fill the test fields with the following test / dummy data:

Please note the message structure below as a valid data format. You can add more variables and devices according to your application using this format if needed:

Finally, click “Publish topic” to test the integration sending data from AWS to Ubidots; you should see your data reflected in your Ubidots account:

6. How to send data to Ubidots, through AWS IoT Core

Although AWS IoT Core is a generic broker that allows you to send arbitrary JSON messages, in order for Ubidots to understand the payload, please utilize the below JSON structure.

To learn more on how to connect your IoT devices to AWS IoT Core, check out these resources: